USB 3.0 is not really getting sufficient traction with no official chipset support from Intel Corp and consumers will have to opt for alternative solutions by using third party add-on or plug-in card in order to enjoy such features. While you may wonder what the next steps the giant chipmaker will take, the recent IDF event held in Beijing may have some clue for you. During the event, Intel Corp spokesperson, Kevin Kahn has disclosed a new optical signaling technology, named as Light Peak that is claimed to be able to reach at least 10Gbps transfer rate, twice faster than existing USB 3.0 to accelerate device connectivity for next generation products. 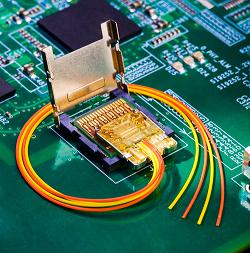 Basically, Light Peak consists of a controller chip and an optical module for light-to-electrical and electrical-to-light conversions to take place. And it is a new technology breakthrough based on optical transmission that intends to extend existing transfer limits on conventional electrical signal. Unlike electrical signal that is susceptible to EMI (Electrical-magnetic interference) and signal integrity issues, Light Peak can get around it with the nature of how light transmits just like fiber optics solution. The benefit is obvious – its extremely high bandwidth can easily allow HD media files transfer in seconds with current 10Gbps and is expected to scale up to 100Gbps in short future. And since it is protocol independent, Light Peak can be used to co-exist with current standards such as SATA, FireWire, HDMI, USB and with potential to totally replace them as a single universal bus to cater for high bandwidth requirement.

The Intel senior fellow further emphasized that Light Peak will be first available to component makers for integration by end of 2011 with final products estimated to reach consumer market by 2011.