Nowadays, the usage of mobile phone and PDA (Personal Digital Assistance) is so common that it becomes critical to keep it secure from unauthorized use. OKI, Japanese leader in telecommunication has recently announced the availability of its Iris recognition middleware that can be implemented on existing mobile phones for better security protection. 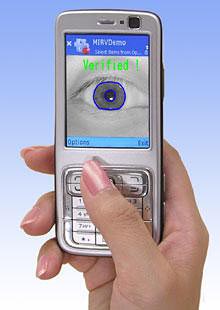 Iris recognition technology is not something new to security segment but its application is first being introduced to mobile market. The usage is always limited to high end security application due to sophisticated hardware and software algorithm involved. These are also translated to higher implementation cost which could only be targeted for mid and high end mobile phone series.

The middleware is said to be compatible with current mobile phones that are running on either Symbian or Windows Mobile OS. On the hardware requirement, it only requires a 1Megapixies camera to capture the Iris patterns and compare it with correct user’s Iris  for authentication. It is believed that the errors happen no more than one in 100,000 trials (equivalent to 99.99% accuracy). And based on its uniqueness of Iris patterns for each individual, it is the most accurate form of security application in the mobile market as of now.