iTunes Apps Could Not Installed on iPhone 0xE8000013 Error

When attempting to sync iTunes library with iPhone, the following error may occur when iTunes trying to sync and install paid and/or free apps to iPhone:

Some of the apps in your iTunes library were not installed on the iPhone because one or more errors occurred. 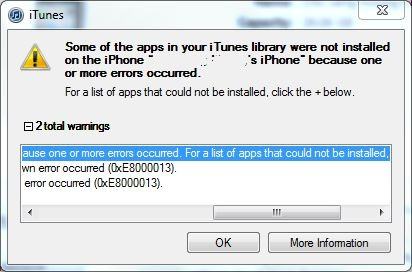 When click on the “+” sign to expand the details, the app(s) that have problems or issues to sync or install on the iPhone will be listed with 0xE8000013 error:

The app “Application Name” was not installed on the iPhone because an unknown error occurred (0xE8000013).

The error normally happens when users trying to sync apps especially after a restore of firmware iOS software, although it may happen on regular sync and installation of new apps to iPhone. The issue does not happen when sync music and movies.

Normally, the app can be installed and synced successfully with iPhone once user re-sync the iPhone (either by clicking on Sync button in iTunes or plug out and plug in the iPhone to computer again) with iTunes library.

However, if the apps still cannot be installed, try the following suggestions to troubleshoot and resolve the issue.