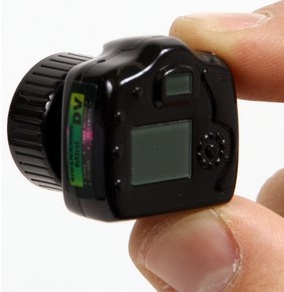 Tiny cameras give the creeps to anyone who has been a victim of unsolicited or illicit photographs. The size of a pencil sharpener, CAMJ Tiny DSLR will definitely get you very excited or make your hair stand on end. The midget can capture 2 megapixel SVGA images and record video at 30fps. Despite its size, the tiny device boasts a 32GB memory card. This means that one would not run out of storage space while on a shooting spree.

The camera runs on a pair of AA batteries on a small portable external charger or can be connected to a USB port. This miniature Japanese camera comes with a year’s warranty. Worn around the neck like a pendant, the CAMJ Tiny DSLR camera can capture images discreetly and inconspicuously. Occupying not even the space of a snack in your luggage, the camera should be popular with light travelers of the fairer sex.