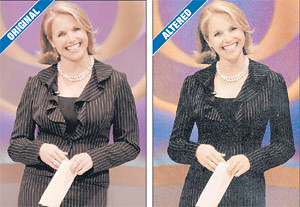 Have you heard about the new celebrity diet craze? It’s easy. No dieting or exercise is required. Just a few Adobe Photoshop lessons and you can lose 20 pounds in the matter of minutes… like new CBS Evening News anchor Katie Couric.

Evidence of Katie’s new “digital diet” was published in a CBS publicity magazine called Watch, and distributed on American Airlines flights. The former NBC Today star’s neck and waistline have clearly been digitally “photoshopped” to make her look about 20 pounds lighter. The original photo was taken at an advertiser presentation earlier this spring before getting a digital workout in CBS’ graphics department.

Is CBS photoshopping more than publicity photos of news anchors? We hope not. Why not let a photo speak for itself?