Apple released an update to Mac OS X, the default operating system for all Macintosh operating systems. The update brings the build version of Mac OS X Snow Leopard to 10.6.2. Mac OS X version 10.6.2 includes general operating system fixes that enhance the stability, compatibility, and security of the Mac, but it also bricks and breaks on many netbook computers when installed.

Snow Leopard 10.6.2 update has included code-bit that make it not compatible with Intel Atom processor that powers the netbook. Previously, Mac OS X has been managed to be ‘hacked’ and forced to install and work on hardware based on the Intel Atom processor, which many users claim as ‘hackintosh’.

A Russian programmer teateam has managed to create a kernel patch for Mac OS X 10.6.2 based on kernel 10.2.0, that allow the OS to be installed on netbook PCs running on Intel Atom CPU. The kernel patch, named as “dirty bithack”, change the following addresses in the mach_kernel 10.2.0: 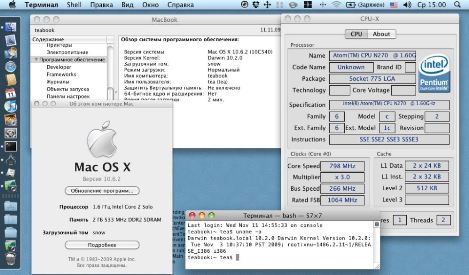 To use the patch kernel, upgrade or install Mac OS X 10.6.2 on Atom-based netbook, then follow these steps: