The famous world-leading innovator and provider of photographic and imaging technology, Canon has announced the launch of its latest addition to its IXUS family, named as Digital IXUS 80 IS or PowerShot SD1100 IS ELPH (US). According to the company, this newest 8-megapixel Canon IXUS 80 compact camera will include the brand new Motion Detection Technology feature, which aimed to determine the movement of the camera and subject so that everyone can say bye-bye to blur. If it works, it will surely be a very welcoming feature. 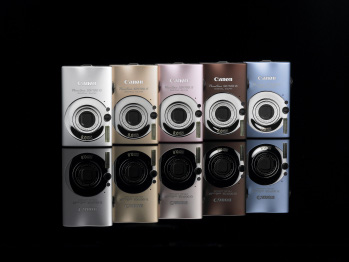 “The Digital IXUS 80 IS is an attractive, intelligent addition to the Digital IXUS range,” said Mogens Jensen, Head of Canon Consumer Imaging, Europe. “It gives users access to the latest Canon technologies to assist them in tricky shooting situations, making even difficult set-ups simple point-and-shoot affairs. They can also match their camera to their personal style, by choosing from one of four colour options.”

“We recognize that many Digital ELPH camera users view their cameras as statements of personal style, valued as much for the image they convey as the images they capture,” said Yuichi Ishizuka, senior vice president and general manager, Consumer Imaging Group, Canon U.S.A. “The color choices of the PowerShot SD1100 IS Digital ELPH camera create additional opportunities for personalization and individual expression.”

The latest Canon Digital IXUS 80 IS which available in Classic Silver, Brown, Gold, Blue and Candy Pink colours will hit the market in coming March 2008 for about $250.