Left 4 Dead 2, the highly addictive and popular single-player and multi-player cooperative first-person shooter (FPS) action horror video game which sets in the zombie apocalypse where survivors fight against hordes of zombies. Left 4 Dead 2 is the sequel to Valve Corporation’s highly acclaimed and award-winning Left 4 Dead. Originally launched on November 17, 2009, for Microsoft Windows and Xbox 360, the game was released on Steam for Mac OS X on September 5, 2010, and since July 2, 2013, for Linux through Steam.

The game of Left 4 Dead 2 alone normally costs $19.99 on Steam. Though it may be available cheaper through purchase of bundled package especially if you have several games in mind, but nothing beats free.

To celebrate holiday, Steam and Valve Corporation is giving out Left 4 Dead 2 for free, from Christmas Day until 10AM PST, December 26th, 2013.

All you need to do to grab the free copy of the game is to visit the game page, and install Left 4 Dead 2 on your computer. Of course, you will need the Steam client installed prior to downloading the game. Once installed, Left 4 Dead 2 will be registered to your account, and is yours to keep forever for free. 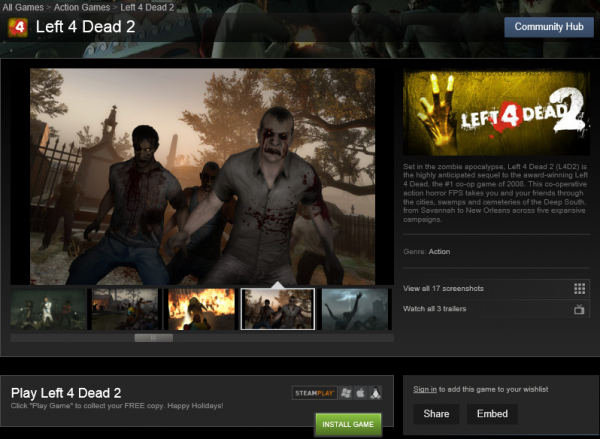 Note that according to offer announcement, you must install the game to enjoy the free Left 4 Dead 2 offer, or else it will go back to regular price, even though the purchase confirmation page showed the Left 4 Dead 2 has been registered to your account.

Already purchased Left 4 Dead 2? There is a new achievement, Ghost of Christmas Present, for you.