Wanted to have a way to configure your carrier or banner name of your iPhones so that it looks different from others? Now with this little tweak from Cydia users will be able to customize these depending on own preference. Named as MakeitMine, it is a free tweak under ModMyi repository that allows users to change it for whatever reason. 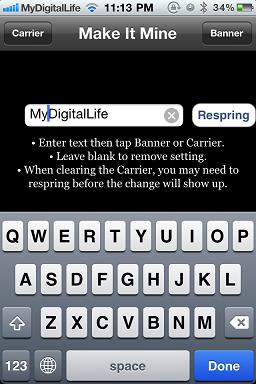 Even though it doesn’t serve any special benefit but it could be kind of interesting especially when you want to personalize the appearance on your iPhone screen. Just imagine, you can easily change the carrier name to something that is meaningful, for instance MyDigitalLife, which is totally up to your control. MakeitMine is free for download in Cydia and is suitable for iPhone and iPod touch.