While most of today’s PND (Personal Navigation Device) are mainly designed for pedestrian or in-vehicle use, Mitac, the famous Japanese PND manufacturer has just announced a new GPS based product targeted for motorcycle riders. Name as Mio C523 v2, it is successor of the previous C523 that is being enhanced with some new feature sets specifically designed for use while riding on the bike. 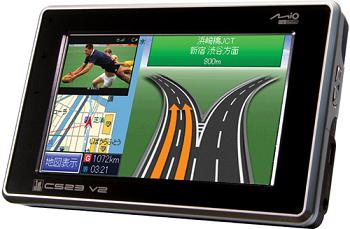 The device is powered by Samsung 2440 processor and assisted with famous SiRF GPS module. What makes it so unique is it has been added with a new mode, called “rider mode” that simplify the viewing complexity and shorten the time to be distracted from street view. For instance, users will only need to check for the arrow pointing direction without worrying much about the complicated map database. Besides, it features with relatively large 4.3-inch touch panel LCD and preinstalled with Windows CE OS (Operating System) that greatly compatible with many user friendly applications.

Similar to most of the PNDs in Japan market, the portable device is further equipped with 1seg digital TV receiver, that makes it one of the must have multimedia device while on the move. The Mio C523 V2 will be reaching market space at a retail price of 44,800 yen, or equivalent to USD448.