After a long wait, Motorola has finally announced its first-ever Android phone which known as CLIQ at the Mobilize conference in San Francisco. The Motorola Android phone has been improved with a new interface which known as MOTOBLUR that customized home screen widgets for allowing the users to check and update their social status, synchronizes contacts, messages, feeds, photos and more from Facebook, Twitter, Yahoo!, Gmail or corporate mail. 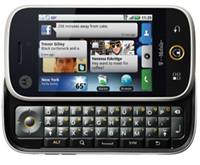 Featured with a 3.1-inch HVGA 320 x 480 touchscreen, Motorola CLIQ is also equipped with a 5-megapixel camera with auto-focus function and 24fps video capture. It boasts with QWERTY keyboard, integrated A-GPS, and preloaded with Amazon MP3 store app, Google browser and Google applications. Besides, it is Wi-Fi enabled and a pre-installed with 2 GB microSD memory card.

“T-Mobile’s highly social and always-connected customers have a natural affinity for mobile social networking, and we’re excited to feature the Motorola CLIQ with MOTOBLUR prominently in what’s shaping up to be our most innovative holiday product lineup ever,” Brodman said. “The CLIQ lives up to Motorola’s tradition of great design and quality, and to our history of working together to create products that enhance the lives and the relationships of our customers.”

Jha said, “We’re pleased to announce our first Android-powered device in partnership with T-Mobile USA. Motorola CLIQ with MOTOBLUR differentiates the Android experience for consumers by being the only smartphone that automatically syncs conversations, contacts and content, and delivers a solution that’s instinctive, social and smart.”

Available in winter white and titanium, the Motorola CLIQ is expected to hit T-Mobile USA in Q4 2009. During the conference, Motorola has also announced that it will launch the same device as Motorola DEXT around the world including France, Latin America and Spain.