The Taiwanese electronic manufacturer, MSI has revamped its GT series notebooks which called as GT628. The notebook is one of the first US-bound systems to carry NVIDIA’s new GeForce GTS 160M and integrated with 1GB of video memory that able to enhance the speed by up to 50 percent faster than the old systems in graphics-heavy games. The chipset also reduces the strain of playing 1080p video. The MSI gaming notebook has a turbo mode that able to over clock the CPU by up to 15 percent when plugged into a power source. 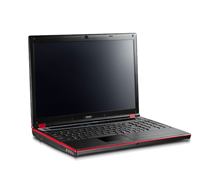 Featured with 15.4-inch display with resolution of 1680 x 1050 pixels, MSI GT628 is also equipped with 2-megapixel webcam. It should be powered by Core 2 Duo processor although the company doesn’t specify the processor. In addition, it also includes Blu-ray reader and extended 9-cell battery.

The new MSI GT628 is expected to be available in mid of April and the price is not yet specify.