If you have experience in overclocking and tweaking your PC system in an attempt to try to bring it to the best optimum performance, you may understand the difficulty of estimating the effort required with multiple trials and errors to get it run at full horse power to boost up system performance without affecting its reliability. Now with the new solution introduced by MSI, users will at least able to estimate the time needed since it simplifies the overclocking effort by just a simple push on the button to get rid of all the hassles and time consuming tasks. Named as OC Genie Technology, it is claimed to be one of the most advanced overclocking technology in the world that helps to tweak and ensure that your PC are in optimum performance with simple effort. 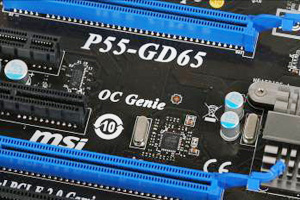 OC Genie Technology combines an OC Genie Button that can be used to trigger the overclocking activities with a dedicated OC Genie Processor being used to detect the best settings out of all trials. It eliminates complicated hardware modification as well as BIOS setup especially suitable for those non-tech savvy users. Since it is automatically run without much trials and errors, the required time can be significantly reduced to one second from conventional methods that take up to 30 minutes depending on experience.