MSI X-Slim X340 With Intel CULV Will Be Available Soon

The Taiwanese electronic manufacturer, MSI, has announced that its first ever notebook PC by using Intel’s CULV platform, the X-Slim X340, will be available soon in the US. The ultra slim notebook is just 0.8-inch thick and weighs 2.9lbs. It powered by 1.4GHz Intel CULV CPU that consumes just 5.5W of power. 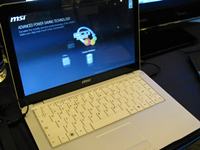 Featured with a 13-inch LCD display with LED-backlit, MSI X-Slim X340 is also featured with a HDMI output, two USB ports, a VGA output, Ethernet port, card reader, audio and microphone connections. In addition, the notebook also has the option of a WiMax mobile broadband module and comes with 4-cell lithium polymer battery. According to MSI, the new MSI X-Slim X340 is performs more like a traditional notebook rather than a netbook and it will expand intel’s CULV platform offering to notebook with different display size.