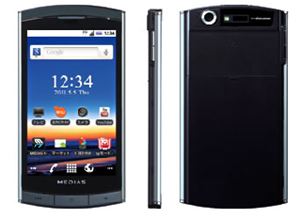 Featured with a 4-inch touchscreen display which operates in 854 x 480 resolutions, the NEC Medias N-04C is also equipped with 5.1-megapixel camera. It boasts with GPS, integrated TV tuner, supports Wi-Fi, GSM and Adobe Flash 10.1, comes with a battery that provides up to 250 minutes of talk time and up to 360 hours of standby time. It is Bluetooth enabled and supports up to 32GB of microSDHC memory card.