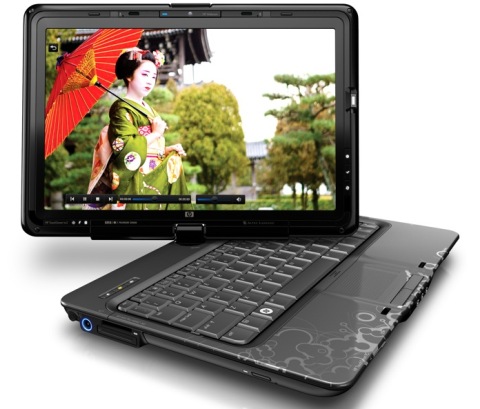 “Breezing through websites and enjoying photos or video at the tap, whisk or flick of a finger is an entirely new way to enjoy digital content on a notebook PC,” said Ted Clark, senior vice president and general manager, Notebook Global Business Unit, Personal Systems Group, HP. “With the introduction of the TouchSmart tx2, HP is providing users an easier, more natural way to interact with their PCs, and furthering touch innovation.”

According to HP, “The convertible design with a twist hinge allows consumers to enjoy the TouchSmart in three modes: PC, display and tablet. With a rechargeable digital ink pen, users can turn the tx2 into a tablet PC to write, sketch, draw, take notes or graph right onto the screen – and then automatically convert handwriting into typed text.”

The new HP TouchSmart tx2 multi-touch Tablet PC that weights at less than 4.5 pounds is expected to be available later this month with a starting U.S. price of $1,149. Check more details and specifications of HP TouchSmart tx2 on its official site.