Verizon Wireless and LG have teamed up to announce a new candy bar phone which is named as LG Cosmos. The LG Cosmos has been featured with a slide out QWERTY keyboard for improved text messaging and email. The phone is also featured with social networking tools for enhanced social networking experience. The compact phone has been designed with a nice round shape and metallic finish. 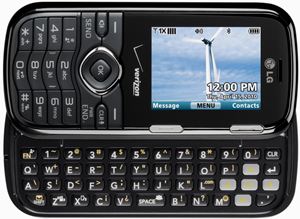 Featured with a 2-inch QVGA display with 320×240 resolutions, the LG Cosmos is also equipped with a 1.3-megapixel camerawith optical zoom function. It has built-in with a 2.5mm headset jack, threaded messaging and micro USB data port. In addition, it is Bluetooth 2.1 enabled, supports up to 16GB of microSDHC memory card and integrated with A-GPS.

The LG Cosmos is expected to be available on 25 March at Verizon Wireless Communications Stores and is priced at $29.99 after a $50 mail-in rebate with a new two-year service contract.