LG has announced the launch of its Android-powered smartphone which is named as LG Optimus (LG GT540). The Android-powered phone is being designed to offer an optimal environment for the first-time smartphone users with easy and convenient mobile access. The smartphone has been featured with Google mobile services such as YouTube, Gmail, Gtalk, Google Maps and etc. Moreover, the SN Manager offers integrated access to social networking sites in a convenient platform that can be manage multiple social networking services such as Facebook, Twitter and Bebo accounts. 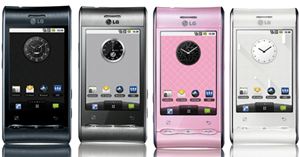 Featured with a 3-inch HVGA touchscreen display, the LG Optimus is also equipped with 3-megapixel camera with geotagging function. It boasts with A-GPS, supports quad-band GSM and dual-band UMTS (900/2100 MHz) connectivity, comes with a 1500 mAh battery and a 3.5mm headset jack. Additionally, it is Bluetooth and Wi-Fi enabled, and supports up to 32GB of microSD memory card.

“LG Optimus is the ideal choice for early smartphone users who expect all the features of smartphones without the complexity,” said by Dr. Skott Ahn, President and CEO of LG Electronics Mobile Communications Company. “This is a device that was designed for regular people who want to jump into the smartphone experience but have been hesitant to do so because of the learning curve. By making LG Optimus more approachable, we hope more people will give smartphones a try.”

Available in black, white, silver and pink, the LG Optimus is expected to be available in UK from 1 May.