Nokia has announced its 16GB version of X6 touchscreen phone which named as X6 16GB. Most of the phone features are similar to its predecessor X6 32GB except the 16GB version does not includes Come With Music download service. The new Nokia X6 16GB has been improved to compatible with all-new Ovi Maps that offers free walk and drive navigation as well as access to Michelin and Lonely Planet guides. Furthermore, it also preloaded with several games including Spore by EA, Asphalt4 and DJ Mix Tour by Gameloft. 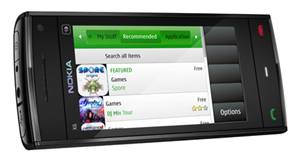 Featured with a 3.2-inch widescreen capacitive display, the phone is also equipped with 5-megapixel camera with Carl Zeiss optics and a dual LED flash. The Nokia X6 16GB is runs on latest Symbian OS and, comes with a battery that provides up to 18 days of standby time and 11.5 hours of talk time.

Available in all black, all white, white with pink highlights and white with yellow highlights, the Nokia X6 16GB is expected to be available in consumer market in first quarter of 2010 and the price is not yet announced.