Philips has recently announced a new phone to its Philips Xenium line up which named as Philips X550. The candy bar phone has been improved for longer battery life which claims to last by up to a month in standby mode. The entry level phone is targeted to those who require minimum phone features. 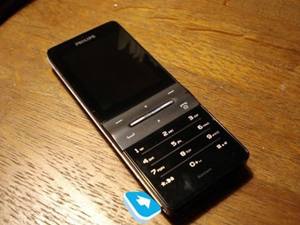 The Philips X550 is similar to other Xenuim phone where it only supports GPRS and EDGE for data transfers. Featured with a QVGA display with 262K colors, it is also equipped with a 3.2-megapixel camera with auto-focus function and has built-in FM radio with RDS. Moreover, it is Bluetooth enabled and supports up to 8GB of microSD card.

According to the source, Philips X550 is expected to be available soon in China and Eastern Europe market. However, the price of the phone is not yet announced.