New Plan to Enable Vehicle to Vehicle Communication in Japan

In Japan, the traffic accidents rate is not considered high. However, there is always a plan to further reduce the number by utilizing high technology that involves communication among vehicles. The MIC (Ministry of Internal Affairs and Communication) in Japan has just decided to allocate 700MHz frequency span as part of the effort to tackle the traffic accident’s casualty rate in its nation. Currently the 700MHz is occupied for analog TV broadcasting in Japan. However since the trend is moving from analog to digital TV broadcasting, the bandwidth allocation will be freed up in year 2012 to give way for the Inter-vehicle communication system to take place. 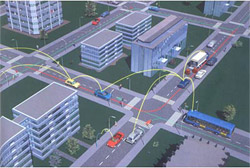 By utilizing this new communication technology, all vehicles in the road will have capability to send and receive RF (Radio Frequency) signals in such that proper safety distance among vehicles can be maintained. Not only that, it is believed to be able to broadcast traffic information among vehicles so that the drivers will be able to avoid heading to the congested destination. Just imagine, the future of auto vehicle driving can be realized depending on how intelligent the in-vehicle control system technology is.

There will be experimental test on the inter-vehicle communication being rolled out in Japan on 2008. This is to ensure that no interference to any RF sensitive device and proper system test can be conducted before the actual implementation. Once after the vehicles are capable to communicate among each other, we should foresee more sophisticated technology being involved to enable vehicle to infrastructure communication.