The Japan-based consumer electronics giant, Sony has expanded its stylish and compact Cyber-shot T-series family with the new DSC-T77 (claiming as Sony’s thinnest model at less than 5/8 of an inch) and DSC-T700 digital cameras, which will be available in a wider selection of color options than previous Sony T-series cameras. 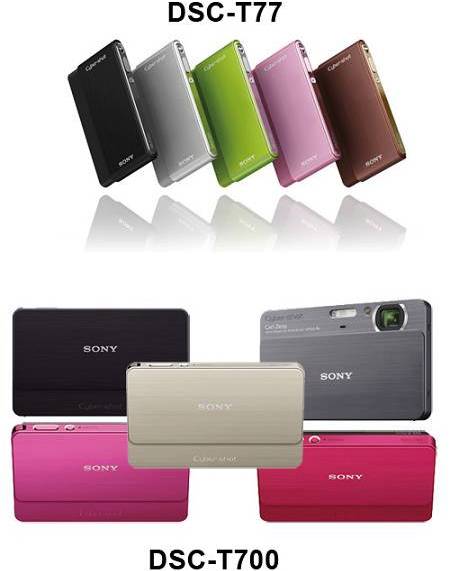 According to Sony, “Both cameras feature updated intelligent scene recognition technology that can now select up to eight different scene modes, including macro, portrait and landscape modes. This technology also includes a new anti-blink function in portrait mode that will virtually make closed-eyed photos an “old school” memory. The cameras will automatically take two shots and then determine whether the subject(s) have closed eyes using their advanced face detection technology. They will only record images with open-eyed subjects. If both pictures have subject(s) with closed eyes, the cameras will record one and display a warning so you can try again.”

“Sony is taking the lead in developing ‘intelligent’ cameras so that taking great pictures is an automatic function and not a complicated process,” said Phil Lubell, director of digital camera marketing at Sony Electronics. “This is part of our effort to enhance the camera experience for customers by offering new functionality.”