In effort to promote its 5530 XpressMusic to the US consumers, Nokia has released its 5530 XpressMusic Games Edition which has been preloaded with 20 games from Gameloft and EA mobile including Sims 3, Monopoly, Solitaire 2, Texas Poker , Pro golf world tour 2010, Tetris, Amecian Idol, Brain Challenge 2 and etc. 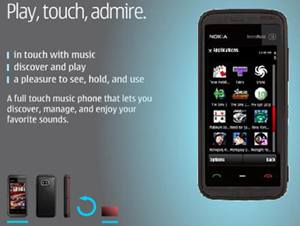 The phone is featured with a 2.9-inch touchscreen display with 640 x 360 resolutions, the Nokia 5530 XpressMusic Games Edition is also equipped with a 3.2-megapixel camera with auto focus and LED flash. It comes with 70 MB of internal memory and 3.5mm headphone jack, supports Wi-Fi 802.11b/g and a music player which supports mp3, SpMidi, AAC AAC+, eAAC+ and WMA. MTP formats. In addition, it is Bluetooth enabled, supports up to 16GB of microSD memory card and, comes with a BL-4U 1000 mAh Li-Ion battery that provides up to 4 hours and 54 minutes of talk time and up to 351 hours of standby time.

Available in black with red accents and white with blue accents, the 5530 XpressMusic Games Edition is now available in US with the price tag at $269.