Recently there is quite a number of mixed good and bad news on Apple’s iPhone product. The official launch of the gadget had received an overwhelming response from all levels of peoples back in June. Not long after the launching, Steve Jobs announced the price slash of $200 to both of its 4GB and 8GB version selling at $499 and $599 originally. This has upset most of the customers that queued up overnight to just get his/her first hand on the products. Fortunately, the emotion was able to be cooled down by a follow on announcement of $100 rebate for those that purchased the iPhone earlier. 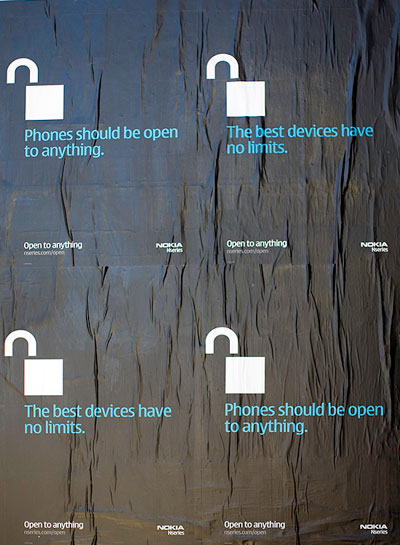 Some rumors spreading and finally confirmed that the iPhone can be hacked and unlocked by free software downloaded online. This has delighted most of the enthusiasts that keen to own a unit especially for those that out of US regions. However, the good news didn’t last long after Apple Inc. released a new firmware upgrade that was said to be able to detect the illegal unlocked iPhone and disable it permanently.

One drawback of the iPhone product is that the consumers cannot switch to their own preferred service providers. They have no choice but to stick with AT&T in US market.

All these bad publicity have been observed by its rivals in mobile phone world.

Nokia, the largest mobile phone manufacturer in the world has recently taken this opportunity to come out with a new advertising campaign that intentionally to remind the consumers on iPhone’s weaknesses so it will gain advantages over Apple’s product. The recent campaign wording posted in New York city quoted “Phones should be open to anything” and “The best devices have no limits” sound to be the “best phrase of the year” for Nokia in tackling its rival’s famous iPhone for the first time.