Although the demand of the Android based phone has been increased rapidly, but this does not stops Nokia from announced its second smartphone based on the new Symbian platform. The sleek and full-touch design Nokia smartphone is named as Nokia C7 and features a combination of stainless steel and glass. The Nokia C7 has been improved with social network applications, three customizable home screens and the ability to access thousands of apps at Ovi Store. 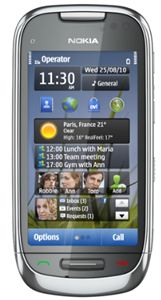 Features of the Nokia C7 includes: