The pioneer of interactive three-dimensional touch for consumer computing, Novint Technologies has partnered with Valve Corporation to add Falcon support (essentially a small robot) to a number of Valve’s games, allowing gamers to feel high-fidelity 3D touch in enabled games. 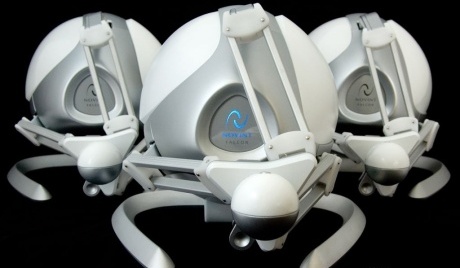 “Recently we’ve seen how new interfaces have changed gaming,” said Gabe Newell, president and co-founder of Valve. “The Falcon adds a new level of interaction for PC gaming, adding compelling force feedback while maintaining controls as accurate as a mouse, and now the millions of Steam gamers will have the chance to play, feeling this new type of experience.”

“We’re very excited to partner with a company so dominant in the PC game industry,” said Tom Anderson, CEO of Novint . “Their sustained excellence, best-selling games, enormous user base, and forward looking vision make them standard bearers for the industry. Integration with some of the best-selling and best-reviewed games of all time, along with access to millions of users on Steam, are significant milestones for Novint. Along with the introduction of the Novint Falcon Pistol Grip, we believe that FPS players using the Falcon will have the most compelling and immersive FPS experience to date.”

According to the companies, “A new update will be distributed through Steam adding Novint Falcon compatibility for customers of The Orange Box, Counter-Strike: Source, the Half-Life 2 series (including Half-Life 2, Episode One, and Episode Two), Team Fortress 2, Portal and the highly anticipated Left 4 Dead. Using the Falcon, players feel realistic game actions, objects, environments and force feedback. In First Person Shooter (FPS) games, users feel weapon recoil, enemy attacks, vehicle movement, and interactions with the environment. A special Falcon Orange Box bundle is planned for later this year. Novint will also soon release its must have Pistol Grip accessory, which replaces the standard Falcon grip to create an even more immersive FPS gaming experience.”