Onkyo has announced its new E702A9 Sotec Media Center PC. The Media Centre PC is paving the way as an ultra compact PC for saving spaces by packaging all the hardware components into one enclosure. 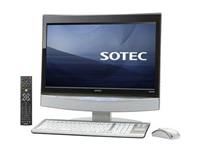 In addition, it also can be iPod dock for synchronization and playback device contents, and supports dual-band TV tuner that allows users simultaneously record two TV programs at once.

The media center PC is expected to be available in Japan on 7 of March and is priced at about $1840.