Panasonic, the famous Consumer Electronics manufacturer has just unveiled its first Bluetooth-enabled DECT cordless phone targeted for both home and office environment. Named as KX-TG9381T and KX-TG9382T, they are bundled with one and two cordless phones respectively that can be synchronized with its base unit and both are able to transfer phonebook to Bluetooth mobile devices as well as on-going calls onto Bluetooth-enabled headset to promote better convenience in digital home. 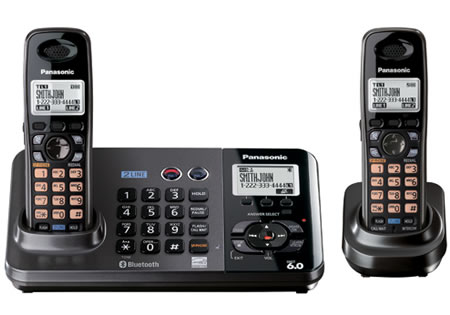 Both of the models are compliant with DECT 6.0 as well as Energy Star and they are capable of transferring contacts and addresses up to 6oo entries via Bluetooth link to Bluetooth-enabled mobile phones. All these can be operated through the tiny menu screen on the cordless phones and they will be sorted in alphabetical order for easy retrieval. Besides, the calls can be linked to Bluetooth-enabled headset so that users can work on other tasks without constraining themselves with limited hands. Other features include the three-way conference call capability, digital answering machine, Silent Mode and many more that would definitely able to offer a much convenient way of handling calls as compared to conventional methods.

The new DECT Bluetooth-enabled cordless phones are already available now and the KX-TG9381T is retailed at $169.95 while the KX-TG9382T at $229.95 and if users need additional cordless phones (up to six units) to be bundled with, they just need to add $79 per unit which is reasonable depending on own needs.