Panasonic, the famous Japanese based Consumer Electronics company has just launched its first rugged UMPC (Ultra Mobile PC) based on Intel recently launched Atom processor. Named as CF-U1, the UMPC is not only powerful in terms of processing speed, but the major selling point is it can be used in extreme environment without worrying about device breaking down. The device is compliant to IP54 industry standards that make it a full prove field machine for industrial and even military use. 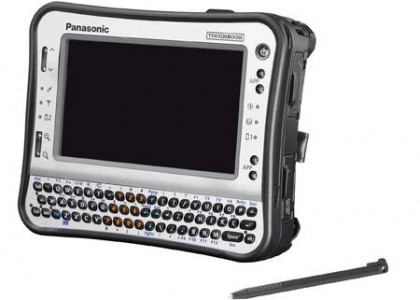 The PC is internally powered by Intel Atom Z520 processor clocking at 1.33GHz. Although this is not the highest frequency SKU (Stock Keeping Unit) in Atom family, but it is more than sufficient for daily web surfing or even performing complicated computer tasks based on its Hyper-threading capability. Backup with 1GB DDR2 memory, users can choose to run Windows XP or even Vista at their own preference. Since it is built to withstand harsh environment with excessive mechanical stress, Panasonic decided to use 16GB SSD (Solid State Device) as a replacement for conventional spinning hard disk that is more susceptible to failure. Typically, it can withstand a drop to the floor from as high as 120cm on the air. Besides, it is also claimed to be both dustproof and waterproof as the whole surface inclusive the keyboards has been sealed completely.

That is not all, it is featured with 5.6-inch WSVGA (1024 X 600 resolution) touchscreen LCD so that user has the option to experience finger scrolling instead of typing on hard keyboards. Additional features include wireless web browsing support utilizing 802.11a/b/g and even 802.11n wireless technology. Optionally, user has the choice to plug in add-on modules to enable bar-code and finger print readers as well as GPS (Global Positioning System) functionalities. No pricing has been announced yet, but the product is expected to hit the market by October 2008.