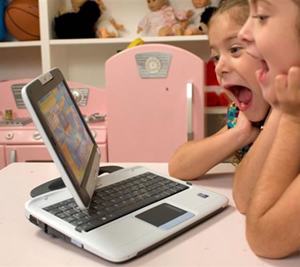 Powered by 1.6GHz Intel Atom processor, Pivot Tablet is also equipped with 60GB of hard drive. It running on Windows XP with a free Walt Disney Windows XP theme that specifically designed for children, has built-in 1.3-megapixel webcam, and pre-loaded with 10 software and game titles for pre-kindergarten, early elementary or upper-elementary students.

In addition, it is Wi-Fi enabled, supports Ethernet, has built-in speaker and microphone, and comes with a 6-cell Li-ion battery that supports up to 5 hours of life.

The Peewee Pivot Tablet laptop is now available with the price of $600.