Posted: May 8, 2007/Under: Freebies & Deals/By: My Digital Life Contributor 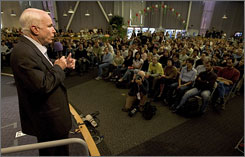 The Google Interview could become the 21st-century equivalent of the candidate’s pilgrimage to the General Motors plant. Sen. Hillary Rodham Clinton was first, in February, followed by McCain on Friday. The company has extended invitations to all the major candidates and expects more campaign appearances in coming weeks.

“I like to think of (seeking) the presidency as a job interview with the American people,” Schmidt, who moderates the sessions, told McCain. “And you’re also sort of interviewing with Google. It’s hard to get a job at Google.”

The company famously demands college transcripts and high grades; Schmidt’s staff whooped at the indirect praise. “I know I have my work cut out for me,” John McCain replied. After apologizing for his mind-bending opening inquiry, Schmidt, a regular Democratic political donor, heaped praise on his GOP interviewee. He asked a series of gentle questions about McCain’s Vietnam War combat and POW experiences, a chapter virtually no one in his audience was old enough to recall.