A Japanese version of Angelina Jolie in Tomb Raider, albeit a rather awkward and clumsy one? Japan’s latest humanoid robot, HRP-4C has 30 motors in her body that enable her to walk and move her limbs. Looking pretty and petit at 5 ft with dark shoulder-length hair, the walking, talking female robot can spot different facial expressions to express different emotions such as anger, surprise and delight. 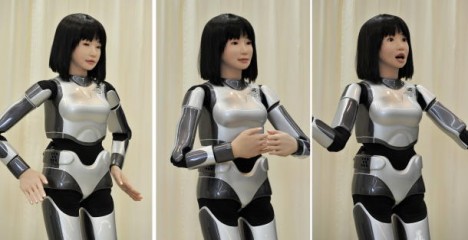 Designed by scientists from the National Institute of Advanced Industrial Science and Technology of Japan, the girlbot is meant to serve in amusement parks or as an exercise instructor in repetitive unskilled jobs rather than as a domestic or office assistant which will require a wider range of physical agility. Marketed more for its looks rather than its functions or abilities, the HRP-4C will set users back by about $200,000.