Smartphone usage has been very common among consumer space and one of the major concerns is its data security. As an effort to enhance the data protection on its smartphone, RIM has officially announced a new protection software named as BlackBerry Protect targeted for BlackBerry smartphone users. 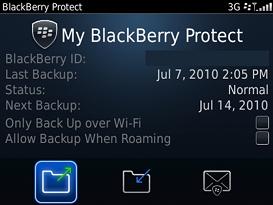 Basically there are many great features offered by the protection software. First, users can wipe off or lock the personal confidential data remotely by controlling using PC whenever the phone is lost. Alternatively, if you think that someone may want to try returning the lost phone but was unable to reach you, there is a way to remotely add the contact information necessarily. Besides, if the phone location is nearby, users can choose to activate its alarm sound so that it could be located easily. But in case it is far away with unknown coordinates, users can still track it based on its built-in GPS module as well as gathering information from cell tower. Last but not least, BlackBerry Protect makes it simple to backup any data via WiFi and even duplicate/restore them back to a newer smartphone conveniently.

Currently BlackBerry Protect is in beta testing with actual launching date for early beta users via invitation codes in BlackBerry Beta Zone by end of this week. The apps will be officially open for public beta by end of this year as one of the enhanced features to safeguard your personal confidential data while on the road.