Rocking Rolly: Latest Gadget by Sony that Dances to Music 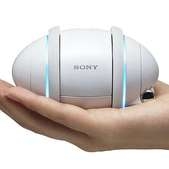 A gadget that swivels, flaps its sides, flashes colourful lights and plays music is set to go on sale in Japan. It is shaped like a space capsule, miniature enough to fit into one’s palm, and comes in pristine white. It is equipped with stereo speakers, 1GB of internal Flash memory, a battery which lasts five hours, as well as sensors to detect which way is up. One can control the volume by turning the player clockwise or anticlockwise, and play tunes by pushing or pulling it on the floor. One amazing feature of the gadget is its ability to spin quickly in place until it resembles a blurry circle. Rolly by Sony is on sale for about $4336. Technology which entertains doesn’t come cheap.

One can download programmed moves to tunes from a Sony website. For the more adventurous, there is a special program by Bluetooth which analyses music to produce simple choreography in rhythm to the music. The really creative and original dance-savvy users can also create their own choreography. This is a fun and cool way to listen to music and dance. Sony’s aim is to introduce a visual element in youngsters’ enjoyment of music.

The Rolly, which plays MP3 files, Sony’s own audio format called, and songs from CDs, can tore up to 600 songs, depending on the length and complexity of the tunes and choreography.