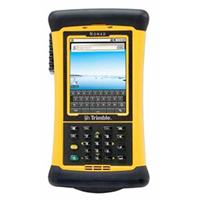 Powered by a 806MHz processor, the Trimble Nomad is also equipped with a full VGA screen with 640 x 480 resolutions and supports up to 2GB of Flash storage. Besides, it is Bluetooth 2.0 enabled. The users also can options for a 2-megapixel camera, GPS sensor and Wi-Fi connectivity.

“SDG Systems has been developing and supporting Linux-based mobile devices since 2001,” said Todd Blumer, President of SDG Systems. “We have the experienced team to develop and support a commercial-quality version of Google Android on rugged mobile platforms. SDG has worldwide deployments of Linux running on the Trimble Nomad and the Google Android platform is a natural extension of our existing Linux implementations. Our goal is to continue to be a world-wide leader of Linux-based software running on rugged mobile platforms.”

The Trimble Nomad with Google Android 1.5 software development kit (SDK) is started at the price of $1,274 for Nomad 800B and end at $2,249 for Nomad 800XE. The qualifying developers can purchase the Nomad-Android development system at 25 % discount and this offer is limited to 2 units per organization. This program runs through by end of July.