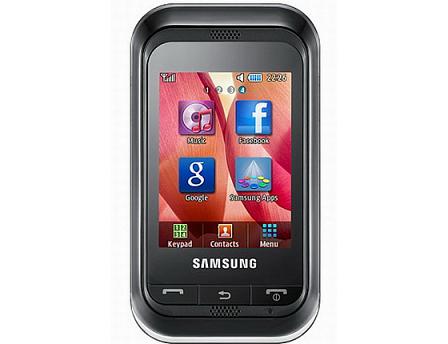 Typically, touch screen module occupies quite a substantial amount of system BOM (Bill of Material) and in order to fit into that price point, the new Samsung Champ has been designed with a relatively smaller 2.4-inch QVGA 240 x 320 pixels resistive touch screen display, even smaller than its sibling Samsung Corby model at 2.8-inch. However, it doesn’t lack of necessary feature sets like Bluetooth 2.1, a 1.3MP rear camera, MicroSD card slot, 3.5mm audio jack and many more, just like most of the entry level mobile phones in the market. That is not all, it is enhanced with the TouchWiz Lite GUI that would definitely enhance its usability with easy and fast menu access at any time.

Estimated to be retailed under sub $150, Samsung Champ will be available in different colors such as white, black, pink and brown for selection. And since it is entry level with more affordable pricing, the new model is targeted mainly for developing countries and emerging markets like Asia, Middle East, Latin America and Africa (Europe is also in the list) with the official availability starting from June 2010 onwards.