Verizon Wireless has just announced the upcoming launch of its second 4G LTE smartphone – Samsung Droid Charge (SCH-i510), which seems like a bit expensive compared to its first LTE handset, HTC Thunderbolt. Samsung Droid Charge is priced at $299.99, while the HTC Thunderbolt carries an initial subsidized price tag of $249.99. Both models need to sign up a new 2-year service agreements. 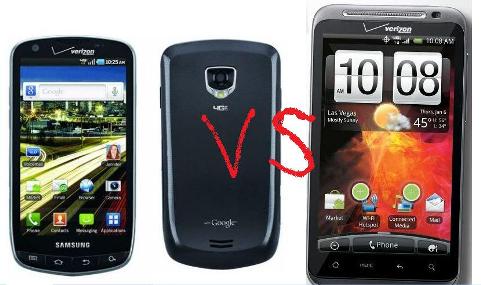 For Verizon customers who are considering to purchase either one of them, below is a comparative table on Samsung Droid Charge versus HTC Thunderbolt for easy checking at one glance on the features and specification between both handsets.

From the table above, you can find that the Droid Charge features better screen display, enhanced Mobile Hotspot (shares up to 10 devices) and higher-resolution video recording than HTC Thunderbolt, but it just adopts a little 2GB on-board memory. Hopefully, Verizon will bundle a large-capacity, free memory card to the package.

The cool new, stylish Samsung Droid Charge LTE-enabled Android smartphone that able to perform lightning-fast 5 to 12 Mbps download speeds and 2 to 5 Mbps upload speeds is slated to be available through Verizon Wireless for approximately $300 on April 28.