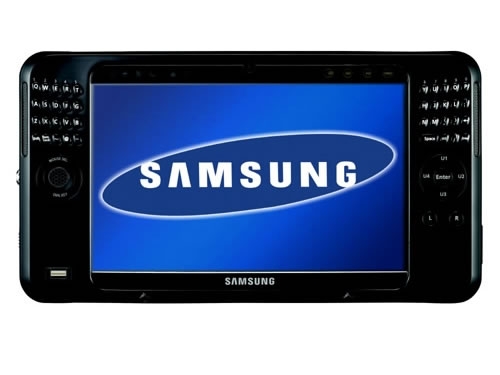 Weighing in at 690g and measuring 23.9mm thick, the Q1 Ultra features a 7-inch widescreen LCD which displays graphics at a resolution of 1024×600 pixels, a Qwerty keyboard in the form of a split thumb pad, a 60GB hard drive, 1GB system memory, improved battery life of 3.5 hours and Windows Vista operating system.

This new Q1 Ultra comes with a fingerprint scanner and two cameras – one for taking regular pictures and videos while the other low resolution camera for video calls and conferencing. It has a variety of connectivity features such as Wi-Fi, Bluetooth, Ethernet LAN and support for HSDPA and WiBRO wireless technologies.

Samsung Q1 Ultra runs on an 800MHz dual-core Intel processor. In terms of software, the Q1 Ultra runs on Microsoft’s Windows Vista Home Premium but includes the software giant’s Touch Pack – a suite of applications and utilities for touch-screen based input. According to Microsoft, it has improved the response time of the interface as well as its touch sensitivity.

How much does the Samsung Q1 Ultra cost? Samsung said it hadn’t decided on the retail price but expects it to cost about 1,100 euros and above.