Samsung has unveiled two new phones which are named as Samsung Sunburst and Samsung Strive. Both of the phones are available via AT&T. The phones have been equipped with AT&T features like SocialNet, Mobile Music, Navigator and etc. 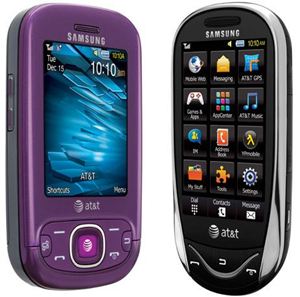 The Samsung Sunburst has been designed with sleek black and burnished chrome. The phone is featured with 3.0-inch touchscreen display and equipped with a 2.0-megapixel camera. It boasts with a virtual full keyboard, supports Bluetooth 2.0 and comes with widgets which enable users with one-touch access to social networking sites like Facebook and MySpace.

The Samsung Strive is a vertical slider and equipped with slide-out QWERTY keyboard. The phone is claimed to be the first device from AT&T which provides three new mobile services like new group messaging service, AT&T Mobile Share and AT&T Address Book. It boasts with a 2.0-megapixel camera and supports Bluetooth 2.0.