Samsung had planned to release ARM Cortex-A9 quad core processor by 2012/2013 time frame, but before its arrival, the company has announced a dual-core Cortex-A9 mobile processor that is expected to reach commercial market by first half of 2011. Named as Orion, it will have two cores with each running at 1GHz, doubling what can be provided by existing Hummingbird 1GHz ARM Cortex A-8 processor for mainstream smartphone market. 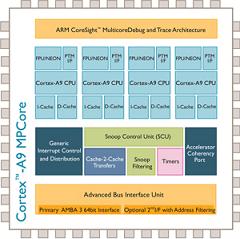 Being developed using 45-nm process technology, Orion is expected to have significant performance boost as compared to ARM Cortex-A8 (using 65-nm process technology) while still maintaining good battery life which is crucial for mobile computing. With its fast CPU processing speed with load sharing between two cores, it can deliver excellent multimedia performance thanks to the use of 32kB of data/instruction cache with 1MB L2 cache. Besides, board makers can choose to integrate different storage with either moviNAND/NAND flash, SSD together with power efficient LPDDR2 or DDR3 memory depending on usage models. Impressively, Orion is claimed to be able to run multiple displays and even HD content thanks to its powerful CPU/GPU cores as well as on-chip HDMI 1.3a interface.

No pricing availability yet, initial sample will be available to some early access customers in Q4 2010, with volume production expected to start on the first half of 2011.