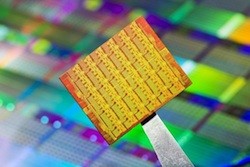 FPGAs allows the chip to be configured into specific circuits by the user, rather than factory default setting, which makes it possible to divide up the transistors within the chip into small groups and perform different task.

By creating more than 1,000 mini-circuits within the FPGA chip, it effectively turns the chip into a 1,000-core processor and each core working on its own instructions.

The chip has been tested on an algorithm central to the MPEG movie format at a speed of 5 gigabytes per second, which is around 20 times faster than current top-end desktop computers.

Dr Vanderbauwhede of University of Glasgow hopes to present his research at the International Symposium on Applied Reconfigurable Computing in March 2011.