The well-known malicious program, Conficker also known as Downadup or Conficker.D, is now evolved and came with the new variant. The new variation of Conficker worms can disable security update such as Microsoft Windows Automatic Update. The Conficker worms are already infected about 10 million computer users worldwide since its launch, although hasn’t causing big trouble since its activation date on April Fool day. The worm is not destroying files or stealing data but have capability to do so. The main concern about this worm is that it is capable of downloading additional code from the hacker’s Web site or through a peer-to-peer connection. 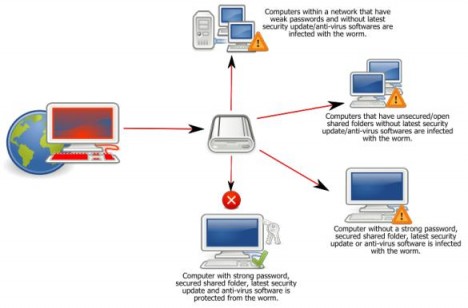 Key features of the Conficker virus are as below:

Only computers that has not been updated with new security signatures provided by KB958644 update is vulnerable. Thus computer users need to download the KB958644 security update from Microsoft.

Users can get the instructions on how to check that computer is infected by worm and how to remove its by click here, and download the KB958644 for respective operating system with Microsoft Download Center links listed in Security Bulletin MS08-067.

To further protect the Windows system, download and install the security software, example listed below.