The Mars Science Laboratory (MSL), which also known as Curiosity, is a NASA rover that will perform first-ever precision landing on Mars. Mars Science Laboratory Rover is scheduled to be launched between October and December 2011. For people who miss out the chance to have your name sent to moon, or people who already had their name footprint on moon, now is time to venture further, to Mars of Solar System.

NASA is offering a chance for everyone to go to Mars, although it’s only “your name” that will make the trip to visit Mars, with actual landing on Mars surface. Every name whose registered will be included on a microchip on Mars Science Laboratory Rover when it’s heading to Mars on 2011.

In order to have your name included in the MSL rover, visit the following URL to submit your information.

After submitting your details, participant will receive a certificate ID number, and can even view and print the certificate of participation, as part of the achievement and testimonial to be part of the history. 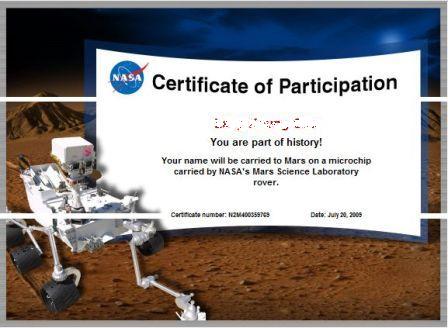