The windows system can be configured to turn off the monitor as well as the computer, or set it in standby mode after a pre-determined period of inactivity. This will help to reduce energy use by the computer and contribute to preserving energy resources. Similarly there are some buttons from the keyboard such as “Power” and “Sleep” which also serve the same purpose. In the event your keyboard doesn’t feature these shortcut keys and you can’t wait for the preset automatic turning off timer to trigger, why not spend some time to create some hotkeys to quick turn off the monitor, put the computer in ‘standby’ mode or turn off the computer completely as soon as you get up from the desk. NirCMd, a small command-line utility offers green users a quick way to set some hotkeys for the above purposes.

Users who want to try to use the NirCMD command line utility can download it via the link here and thence save it into a folder. To set hotkeys for the aforesaid purposes, users first of all need to create shortcuts (One shortcut for one hotkey). Users can go to desktop and create a new shortcut. Users will be prompted with a small window which requests users to browse the location for the shortcut. Users need to locate the nircmd.exe file as shown in the photo below: 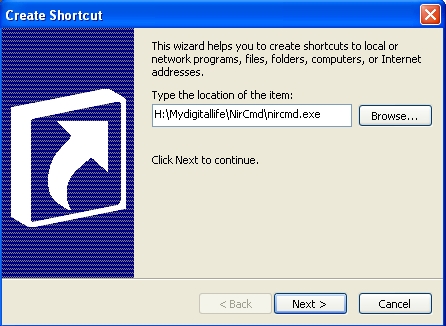 At the end of the text field for “location of the item”, add in the following command line: 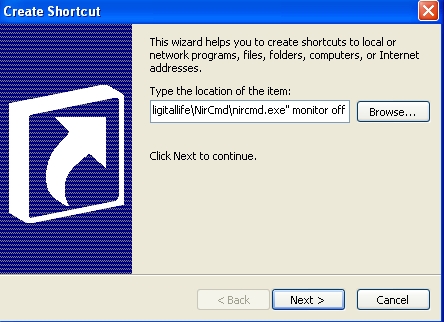 For instance, users want to create a shortcut and thence apply the hotkey to turn off the monitor; once the hotkey is hit, users just need to add “monitor off” at the end:
“H:\Mydigitallife\NirCmd\nircmd.exe” monitor off

Once the shortcut is created, right click the shortcut and select properties. Look for the “Shortcut Key” field and assign a shortcut key accordingly. For instance, users can assign Ctrl + Alt + M to turn off the monitor once the keys are pressed.

Via these simple command lines, NirCMd gives users a quick and more straightforward way to turn on/off their monitor as well as computer and thus help to reduce energy consumption.