Previously we mentioned about Samsung E1107 as the first commercial available mobile phone from Samsung, now Sharp has just announced a similar eco-friendly concept mobile device for consumer market. Named as SH002, it is embedded with polycrystalline silicon solar cell module in its panel that helps to convert solar power into electricity for battery charging while on the move. 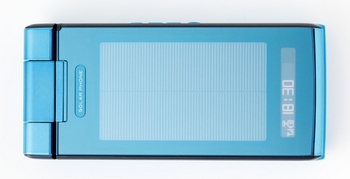 Unlike Samsung E1107 that targets more on entry level consumers’ groups, the SH002 is featured with various technologies that make it fit well in middle and high end mobile market requirements. Some of the feature sets include 5-Megapixel camera module, Bluetooth and even GPS (Global Positioning System) which are quite sufficient for an average user. Not much technical details on the solar conversion efficiency, but the manufacturer claimed that putting it under the sun for 40 minutes is capable to provide 1 minutes talk time, which is not too bad especially when the battery run flat in critical emergency situation.

No pricing information yet, the next generation mobile phone will be brought in by KDDI service provider into Japan market by end of this month.