The Japanese telecommunications and media corporation, SoftBank has recently lined up two new cool mobile phone from Sharp, named as Solar 936SH and 934SH. Both of the phones have been improved for water resistance and are targeted at sport enthusiastic. 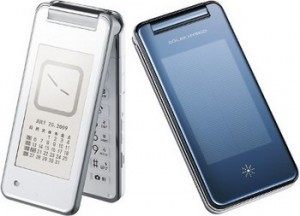 The Sharp Solar 936SH is another eco-environmental friendly phone which featured with a solar cell. The solar power phone is able to provide up to 1 minute of talk time and up to two hours of standby time with 10 minutes charge from the sun. Equipped with a WVGA screen, the phone also has built-in 8-megapixel of camera, supports WCDMA, GSM network and wireless enabled. Moreover, it is Bluetooth enabled and has a water-resistant casing with a degree of protection IPX7.

The 934SH is featured with a 3-inch monochrome external screen that can display date, news, weather and etc. In addition, it also equipped with a 8-megapixel camera, has built-in ultraviolet radiation for the safety of the user and a waterproof shell.

The Sharp Solar 936SH is expected to be available in August and the 934SH will be released in June.