Instead of sticking the yellow sticky pads all over your monitor and messing up your workstation, the Redmond Company understands your inconveniences and has incorporated the Sticky note feature in Windows 7 (and also in Vista). With Sticky Notes app in Windows 7 (open via All Programs -> Accessories -> Sticky Notes), users can freely write to-do list or jot down important numbers for later reference. Windows 7 users can either type in their note or use a table pen to start jotting essential notes. Even though the feature is cool and useful especially for absent minded people, improvements can still be made particularly on the default fonts. Since it is meant for quick jotting of important messages, Win 7 has set Segoe Print as the font style and 12 as the font size respectively. Users are allowed to change the background colour, but there is no option in the app itself to change the font size and font format. The rather traditional default Segoe Print font style and the font size might not be favourable to everybody, especially for younger users.

Since Sticky Notes is not a word processor which has many options for text editing, users who do not like the default font format and size cannot change the setting easily. Having said that, users can refer to the keyboard shortcut keys below if they want to make some changes: 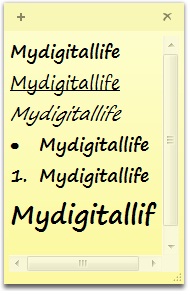 In the event users do not like Segoe Print, users can type their short notes and select the preferred fonts from some word processor apps such as Microsoft Word and paste to Sticky Notes accordingly. If handwriting reveals a lot about a person, the font type may be significant to the message writer.