Previously we mentioned about Shuttle XS29 and XS29F that are based on VIA’s Nano based solution, now the famous PC manufacturer has upgraded to much more powerful system based on Intel latest Atom D510 processor. Named as XS35, the tiny nettop machine will be designed with Nvidia Ion 2 integrated graphics solution targeted for much graphics intensive multimedia applications. 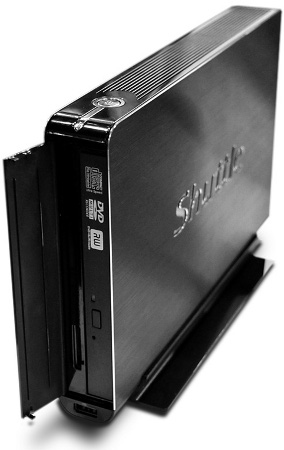 The Intel Atom D510 is a dual-core SKU running at 1.66GHz and when combined with NM10 controller chipset, it offers various interfaces that are able to extend its connectivity with Ethernet, USB 2.0 ports, legacy IOs, audio ports, video ports such as VGA, HDMI and even DisplayPort. In order to enhance its graphics processing as compared to predecessor Atom-based nettops, a newly designed Ion 2 GPU has been optimized to work on all series of ‘Pineview’ processors that can be targeted to deliver an impressive 1080p HD (High Definition) media decode and playback with DirectX 10 compatibility. Other hardware specifications include a 2.5-inch hard disk drive, an optical drive as well as a multi-format card slot for expansion storage. All these are well packed into a sleek casing with VESA mounting interface that can be attached to the back of any display panels suitable for space constraint environments.

No pricing information yet, the Shuttle Barebone XS35 will be commercialized by second quarter of this year as one of the most powerful but yet fan-less nettop machines in consumer market.