Sony Cyber-shot DSC-W170 offers a 10.1-megapixel sensor, a Zeiss 5x optical zoom and a 2.7″ LCD display. The model also has an optical viewfinder, an increasingly rare feature that’s useful when the LCD is difficult to see, or when trying to conserve power. 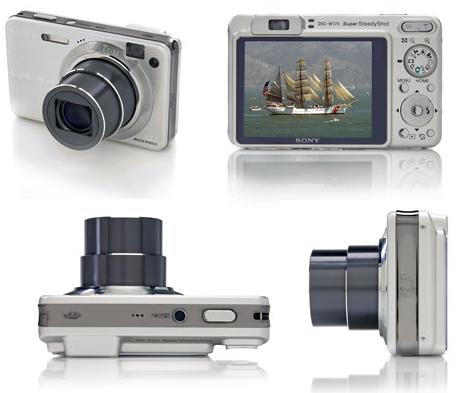 The Sony Cybershot W170 is available in the market since April 2008 and cost about US$300. This W-series lineup features a wider range of color choices. It is available in pink, blue, champagne gold, and red.

The DSC-W170 incorporates Sony’s Super SteadyShot optical image stabilization to minimize blur caused by camera shake at slow shutter speeds. Other Sony W170 features include ISO sensitivity to maximum of ISO 3200, a Memory Stick Duo/PRO Duo card slot, plus 15MB of built in memory. The Sony W170 derives its power from a proprietary Lithium-ion rechargeable battery, which can take 370 shots on a charge. The Sony W170 also offers high definition component video output, via an optional proprietary cable or cradle.

The Cyber-shot W170 includes Sony’s latest face detection technology, which can now distinguish between the faces of children and adults. “Child priority” or “Adult priority” modes are available and the camera will detect up to eight faces in a frame and optimize focus, exposure, white balance and flash.

The Cyber-shot W170 also features Sony’s new intelligent scene recognition (iSCN) technology, which allows the camera to automatically select what it “thinks” is the optimal scene mode for a variety of shooting situations. In advanced iSCN mode, the camera will not only take a photo based on the user’s settings, but will automatically take a second photo if it determines that another setting would yield better results. The user then has two images to choose from.

The Sony W170 offers a number of additional features, including: Sony’s D-Range Optimizer to retrieve picture detail in photos with harsh highlights or dark shadows; semi-manual focus that allows you to select the focusing distance based on your subject’s location; and in-camera editing functions such as “unsharp mask” to sharpen images.