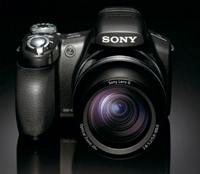 Featured with a tit-angle 3.0-inch LCD, Sony DSC-HX1 is also equipped with a 9.1-megapixel shooter with an Exmor CMOS sensor that helps in speedy picture taking. The high-speed mechanical shutter has improved the speed by up to 10 frames per second. In addition, the new sensor also enables high definition movie capture up to 1080/30p and built-in stereo microphone for sound captured.

The Sony Cybershot DSC-HX1 camera is expected to be available in April and is priced at $500.